Martin’s Bar & Restaurant is home to one of England’s largest and most important private collections of fire engine memorabilia. The collection has been built up over three decades by Martin Cox, a member of the family who has owned Highlands End Holiday Park for nearly 50 years.

Martin himself previously served for many years as a Retained Leading Firefighter with the Dorset Fire and Rescue Service. Exhibits on view range from historic firefighter helmets and other curios to a magnificently restored 1936 Leyland fire engine and a 1902 Merryweather horse-drawn steam engine.

Martin’s Bar & Restaurant was extensively refurbished and extended in 2017 and this provided the opportunity to provide an even more eye-catching setting for the exhibits, which celebrate firefighters and their life-saving achievements through the ages.

A wall of photographs next to the bar depicts local firefighting history and is a talking point for locals and visitors. The collection draws enthusiasts from across the UK to see the exhibits, with a recent addition being a Land Rover Fire Engine which promotes the venue and the history of the fire service at local events like West Bay Day. To continue the fire engine theme, in 2018 Martin’s Bar & Restaurant opened the ‘Little Fire Station‘ indoor soft play for children aged 6 and under and in 2020, improvements were made to the outdoor adventure play area on the park, which includes a large fire engine play apparatus. 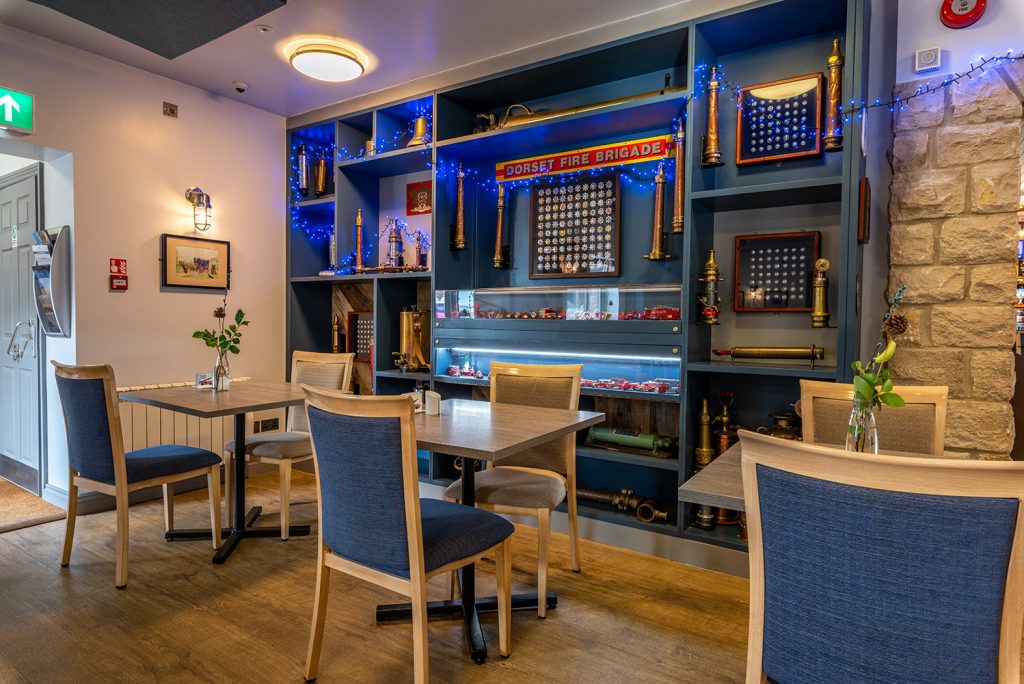 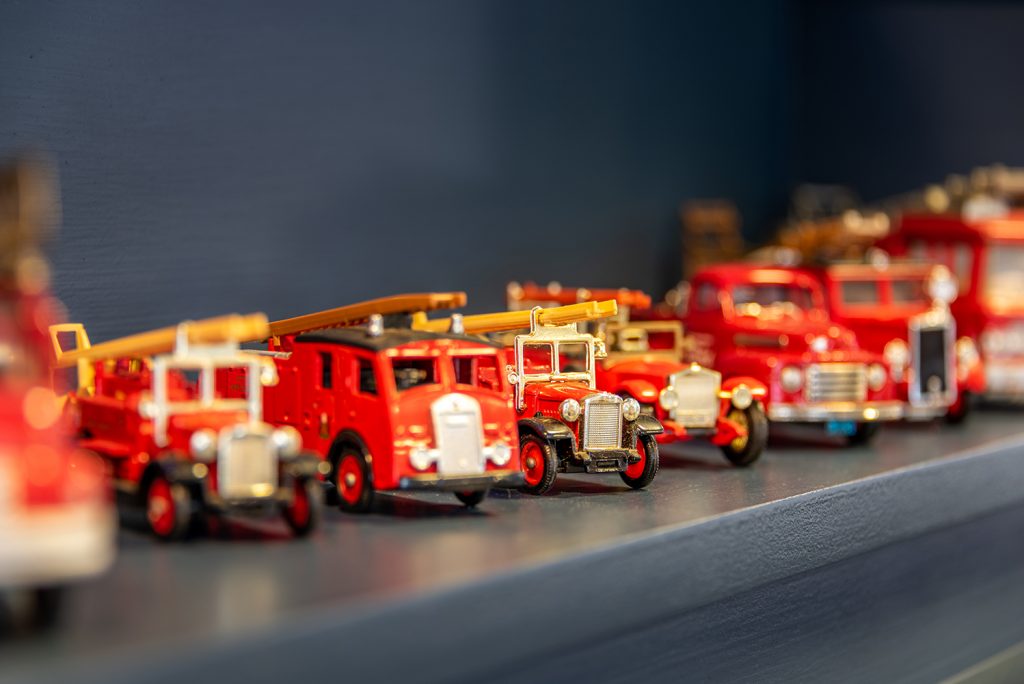 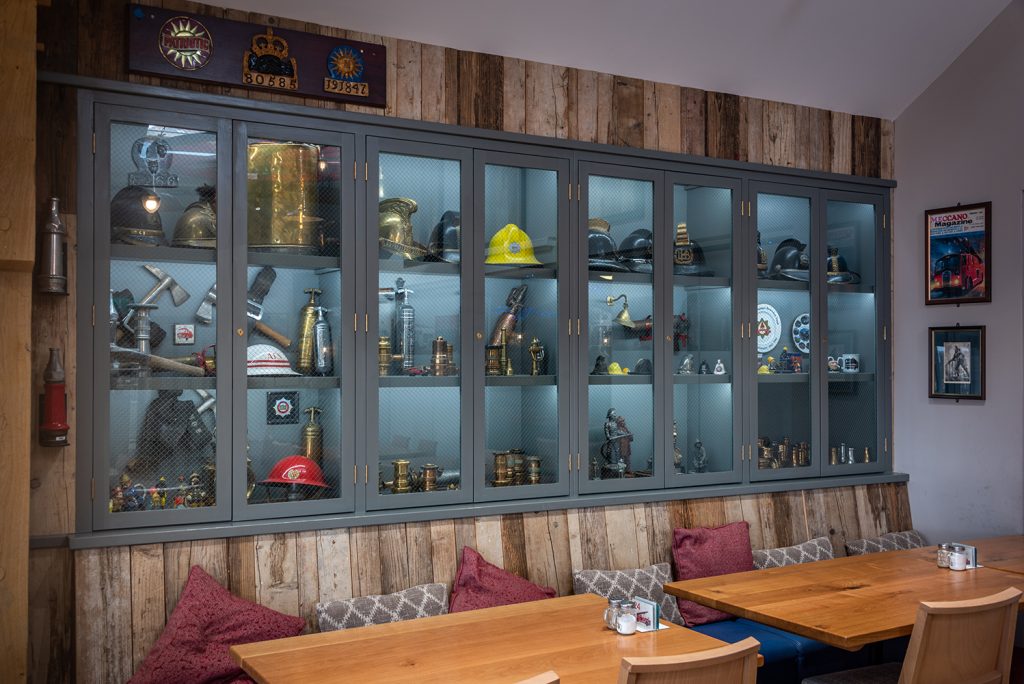 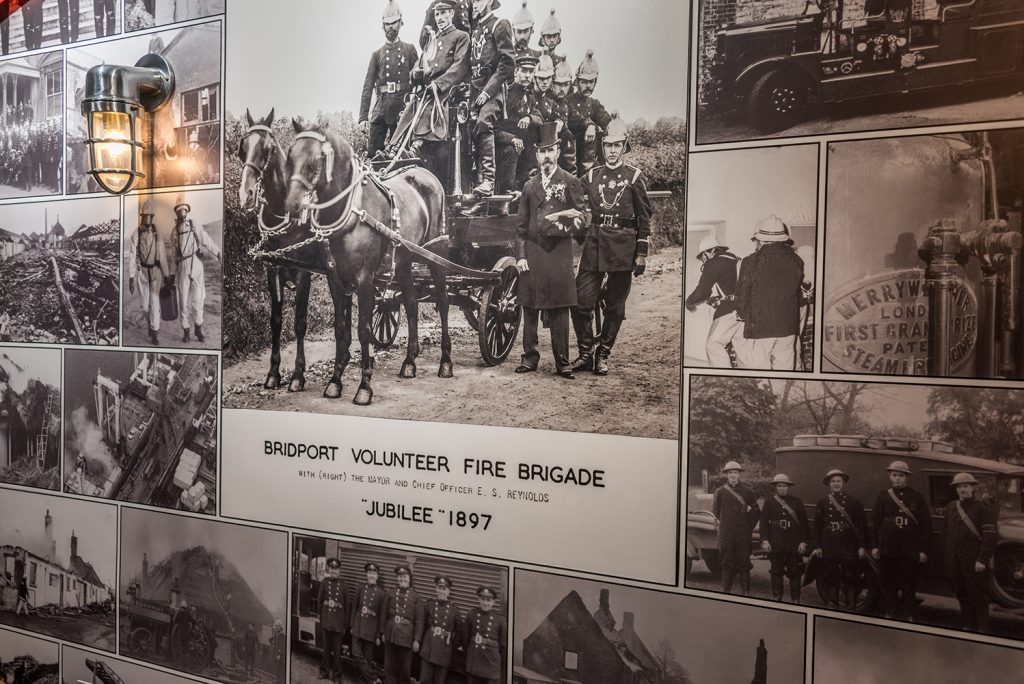 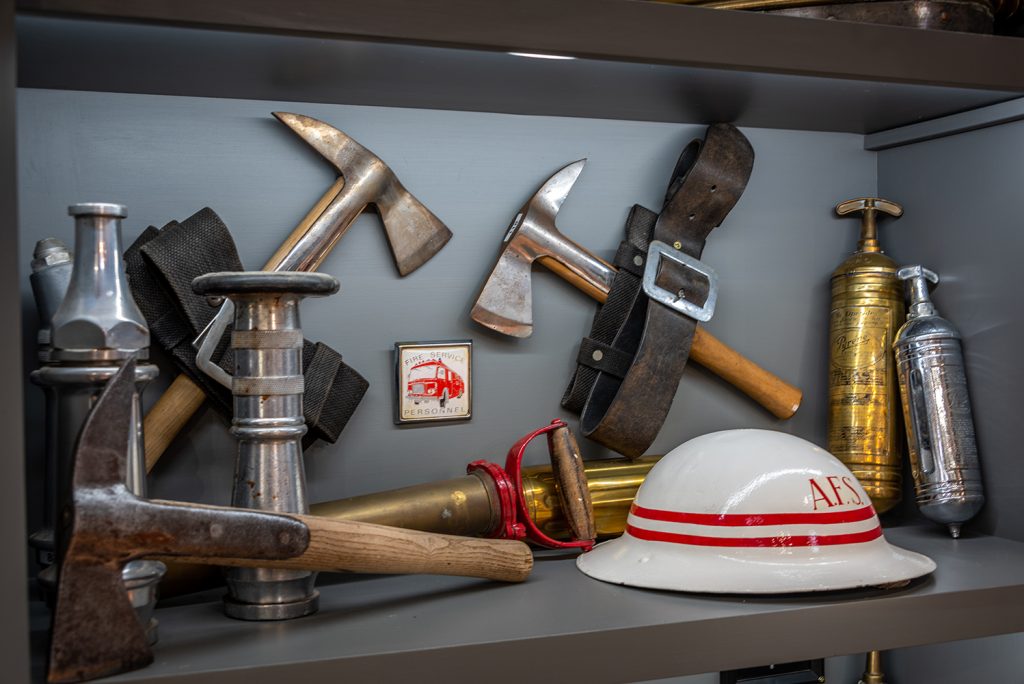 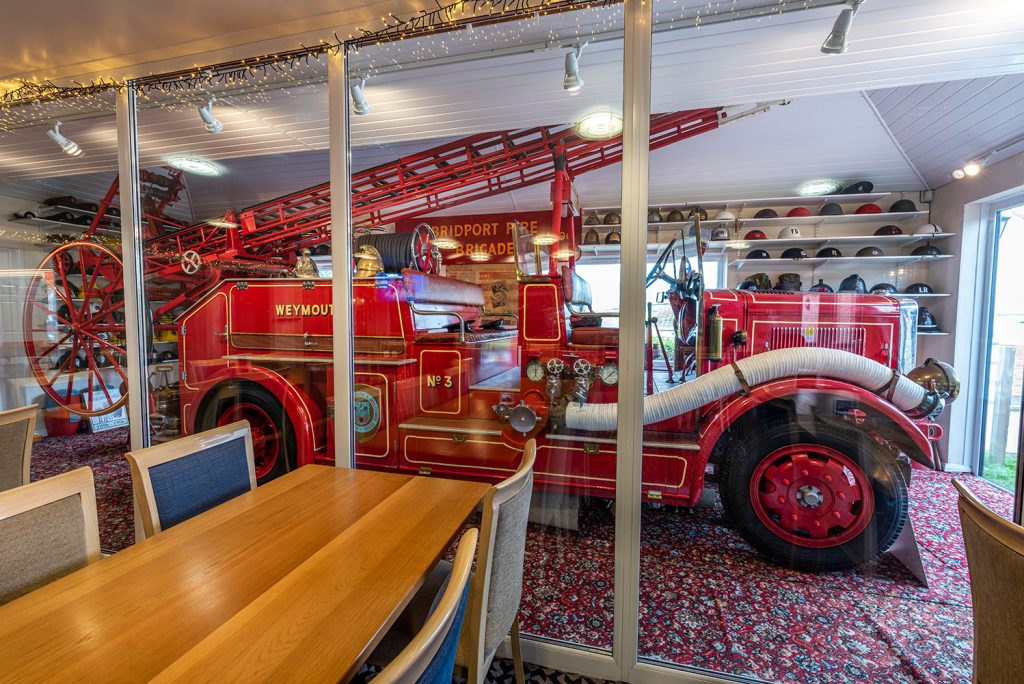 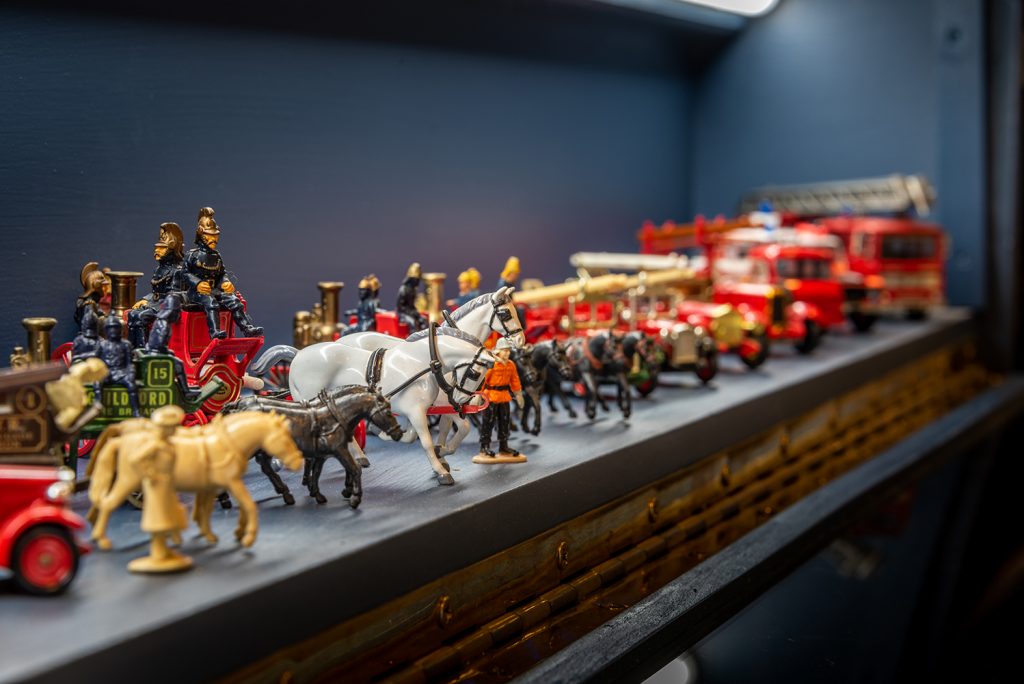 For the first six years after it was established in 1896, the Bridport Fire Brigade relied on hand pumping water from local rivers for putting out fires.  At the turn of the century, a London firm thought of mounting a boiler onto a cart base – and the Merryweather horse-drawn steam fire engine was born!  The fire crew used to start the boiler before they left the fire station, and it took just ten minutes to get up enough pressure for pumping, so was ready to go by the time the horses had raced to the fire.

In 1902, Mayor Edward Reynolds, raised enough money by public subscriptions to buy a Merryweather for the Bridport Fire Brigade to commemorate the Coronation of Edward VII.  Initially, the fire engine was drawn by 3 horses supplied by the Bull Hotel;  when all the horses were commandeered by the Army in 1916, the Fire Brigade used a Daimler shooting brake once owned by the King.

The Merryweather was in service for 34 years, although it was only used occasionally after 1926, when the Fire Brigade upgraded to a mechanised ‘six-wheeler’.  In 1960, Francis Parker, who had connections with Bridport, saw a photograph of the fire engine rusting away in a Birmingham scrapyard, rescued it, restored it, and in 1964 gave it to Bridport Borough Council “for the enjoyment of the town”.  The Mayor at that time was Councillor Keech, who had been the first motor mechanic and driver for the Merryweather nearly sixty years earlier!

For many years the engine was on display in a glass case on The Green in West Bay, but, damaged by the salty air and by vandalism, it was rescued (for a second time!) in the early 1980s.  It was given another restoration and kept in Bridport Fire Station until 1996, and then in a variety of temporary stores until it came on loan to its current home here at Highlands End on 23 July 2003.

Pride of place in the Highlands End display goes to Barkis, the 1936 Leyland Pump Escape fire engine, named after the character in Dickens’ David Copperfield who is always willing. It was at Weymouth originally and ended up at Dorset Fire Brigade. From 1963 to 1967 it was in Bridport.

The Barkis was lost until the mid-80s when Martin was contacted by someone with whom he used to work at County Hall who had seen it advertised in Halifax and went up and brought it back. It was completely rubbed down and resprayed and put it back to its 1936 spec by copying the photos. 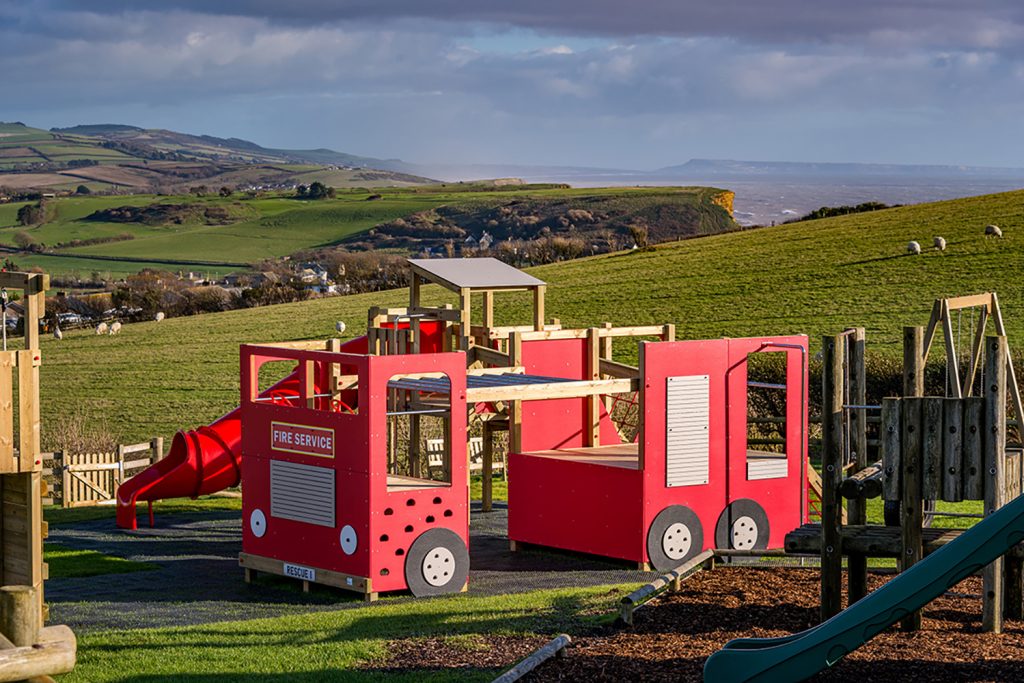 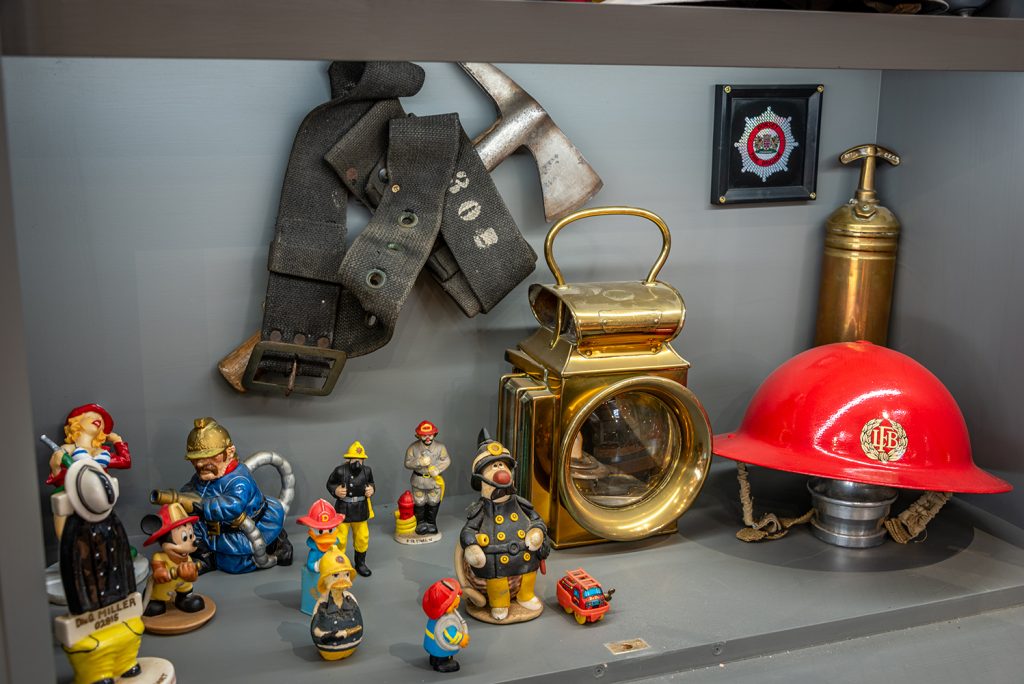 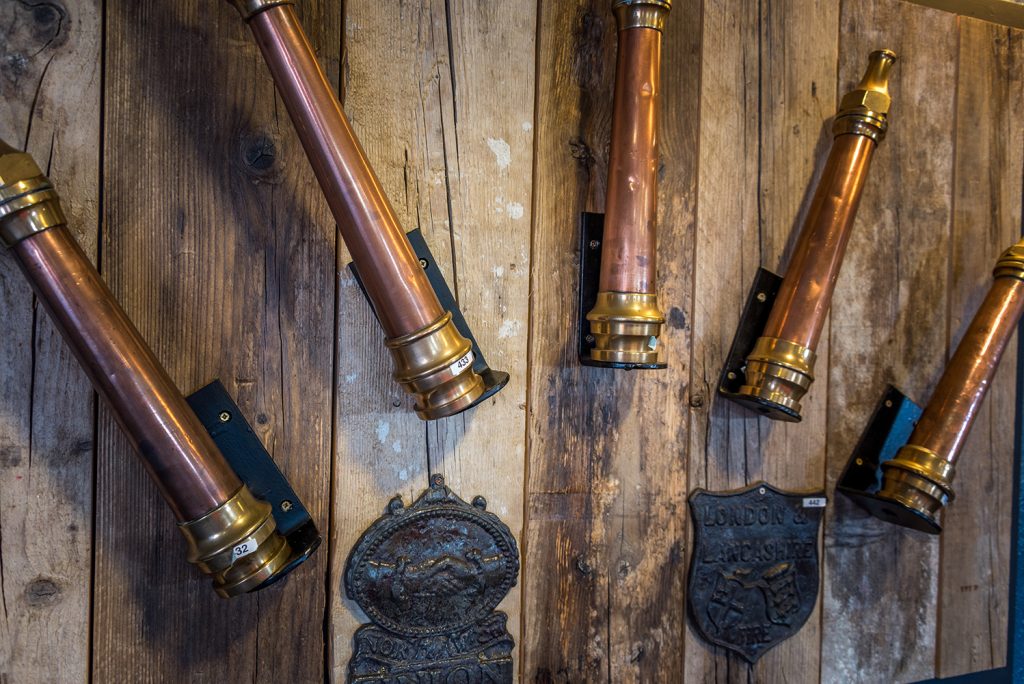 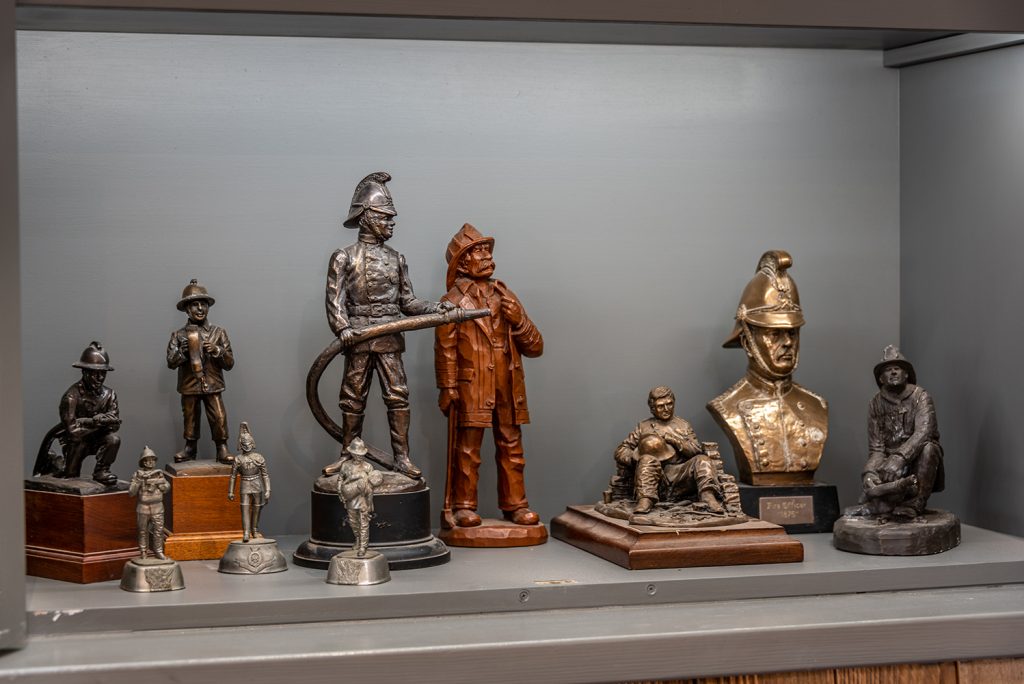 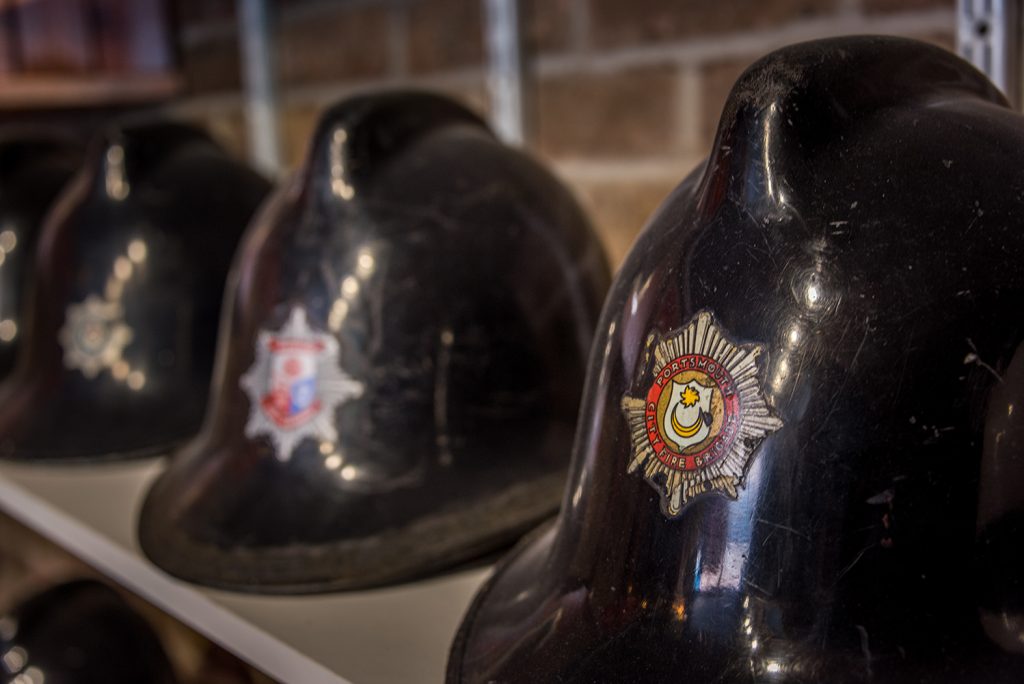 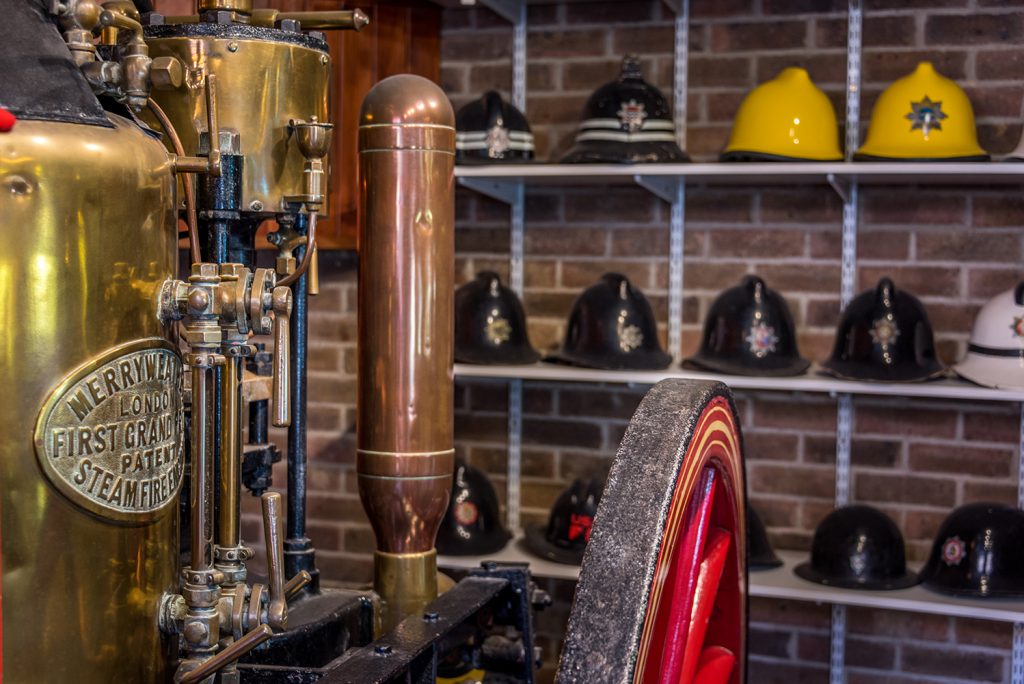 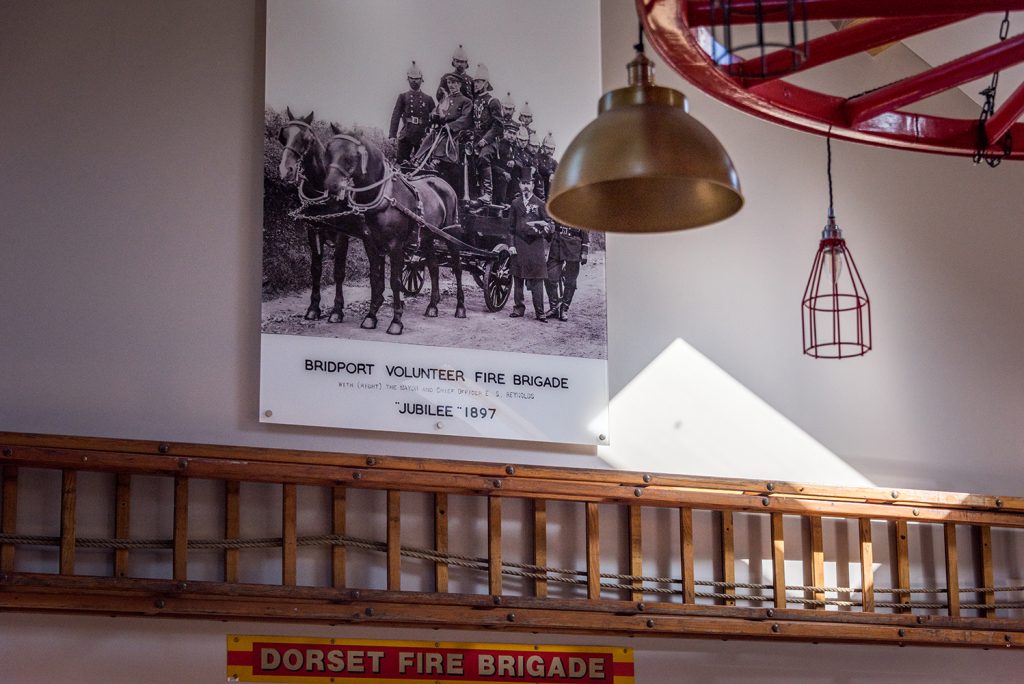 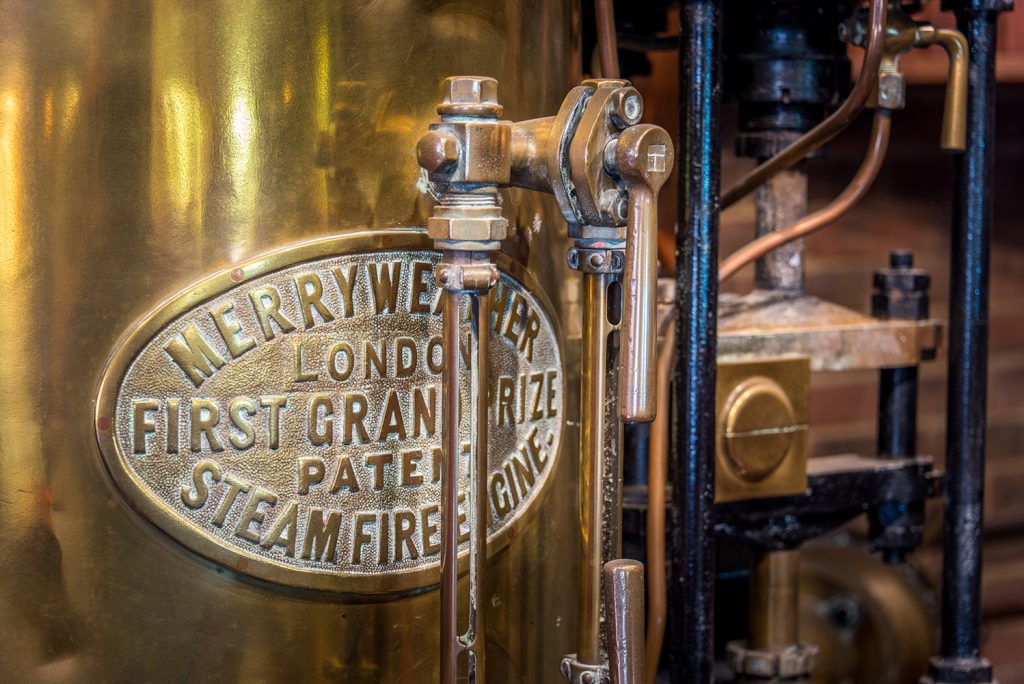 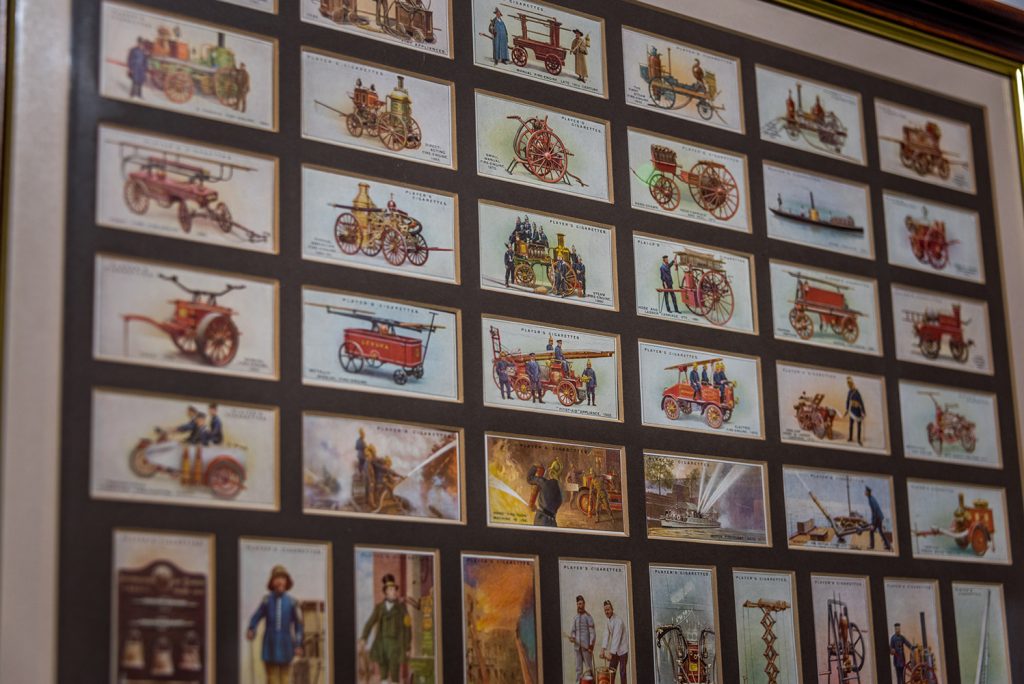 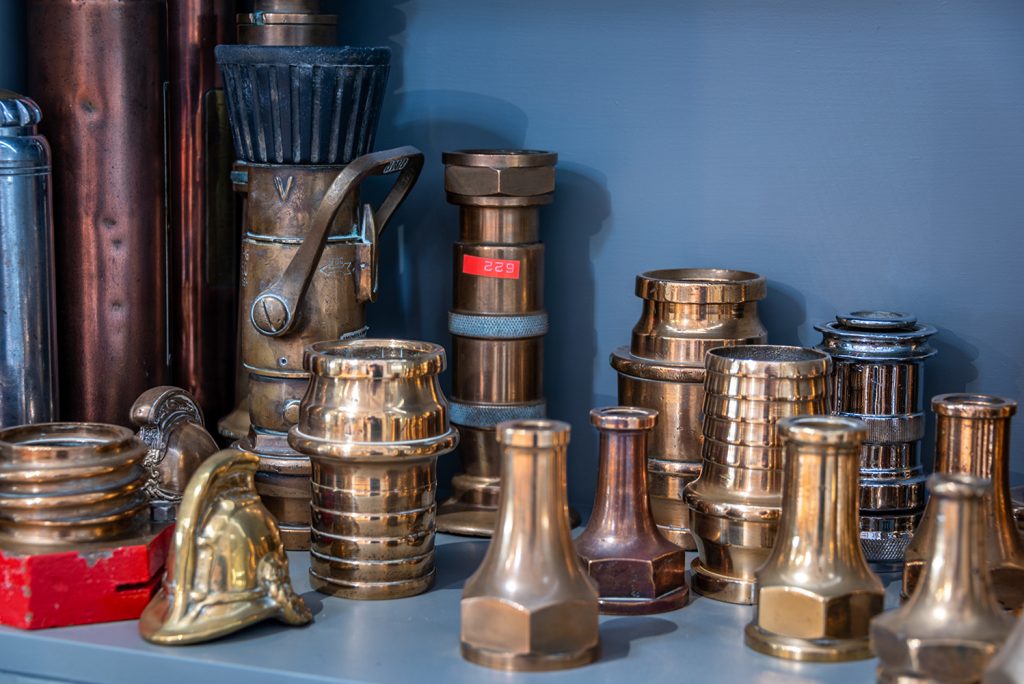